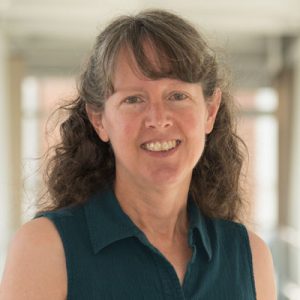 Brenda graduated with highest honors from University of Illinois (Champaign-Urbana, IL) with a B.S. in microbiology. She entered the graduate program in Bacteriology at the University of Wisconsin-Madison in 1987. She joined Dr. Tim Donohue’s lab to study the regulation of cytochrome c2 expression in Rhodobacter sphaeroides. Her first year was funded with a WARF fellowship. Then she was awarded a 3 year NSF pre-doctoral fellowship. She completed her Doctoral thesis in February 1994. She joined Dr. Elizabeth Craig’s lab in Biomolecular Chemistry as a post-doctoral student in August 1994. She was awarded a 3 year NSF post-graduate fellowship to study the role of cytosolic chaperones in protein folding of newly synthesized polypeptides in Saccharomyces cerevisiae. She moved to Biochemistry with Dr. Craig as an Associate researcher in May 2002. She was promoted to a Researcher in September 2017.

Brenda is interested in the role chaperone proteins play in three different processes: iron-sulfur cluster assembly in the mitochondria, translocation of pre-proteins into the mitochondria and understanding the essential role of Sis1, a cytosolic J-protein co-chaperone of Hsp70. Brenda primarily uses various genetic techniques to elucidate how these different processes function in the model organism, Saccharomyces cerevisiae.