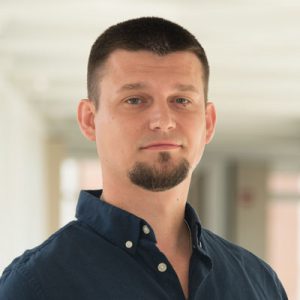 Szymon started his studies at the Intercollegiate Faculty of Biotechnology at University of Gdańsk and Medical University of Gdańsk in Poland and graduated with a B.S. in 2006 and an M.S. in 2008 working in the field of molecular biology. During that time he also graduated from Gdansk University of Technology in 2008 with an engineer’s degree in Molecular and Pharmaceutical Biotechnology. He continued his work at the Intercollegiate Faculty of Biotechnology UG-MUG as a PhD. student under supervision of Dr. Jarosław Marszałek. During his work he collaborated with Dr. Elizabeth Craig and after graduating with a PhD degree in 2012 he moved to UW-Madison and joined her laboratory group as a post-doctoral student. He is now an Assistant Scientist.

Szymon is interested in the structural and functional basis of protein-protein interactions during Fe-S cluster biogenesis. In his dissertation work he investigated the molecular interface between two interacting proteins from S.cerevisiae, the J-protein Jac1 and Isu1, which is the scaffold protein for Fe-S cluster synthesis. He also examined the physiological role of the Jac1:Isu1 complex in mitochondrial Fe-S biogenesis in yeast. He wants to continue his research analyzing the molecular basis of Isu1 interaction with other ISC machinery components like Nfs1, Isd11, Yfh1 and try to reconstitute step-by-step the Fe-S cluster biogenesis pathway in laboratory conditions.